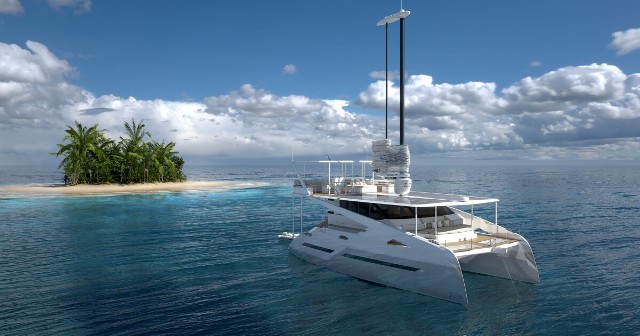 According to Malta’s ZEN Yachts, many solar catamarans come equipped with generators that essentially makes them hybrid diesel-solar vessels. Zen50 solar-electric yacht is described as a true solar boat, and is also reckoned to be the first production yacht to feature a wingsail.

Zero Emission Nautic – or ZEN Yachts – hasn’t actually built the Zen50 yet, but the first order is in and headed for launch in early 2023. Designed by acclaimed naval architect Julien Mélot, the 15.7-m (51.5 ft) luxury yacht features carbon fiber and Corecell composite hulls inspired by performance catamarans for minimal drag, with optimization courtesy of computational fluid dynamics analysis, and sports a 16-kW solar roof and a 160-kWh main battery bank to power the all-electric propulsion system.

On motor power alone, the leisure craft is expected to have a maximum speed of 10 knots, but this vessel also has a semi-rigid Oceanwings OWS 3.2 wingsail installed to help increase that top speed to 14 knots. Zen Yachts reckons that folks can expect over 180 nautical miles (~330 km) of range over a 24-hour period, though probably not at those speeds. Cruising speed on solar/battery is reported to be 4.5 – 5 knots continuous, or 6 – 10 knots for both solar and wingsail.