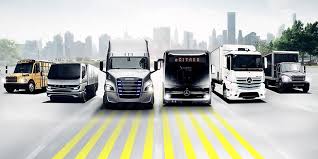 Such a network for freight trucks could be the linchpin to transform the transportation of goods in ways that reduce pollution and the carbon emissions that underlie climate change. The findings suggest that private industry and policymakers stand to gain from creating such a network to leverage the next generation of battery technology, which promise to radically cut emissions from vehicles, and to eventually be more economically efficient than current diesel trucks.

Achieving the aims of the Paris Agreement will require reducing the emissions from heavy transportation trucks, which generate roughly 7 percent of global carbon. The idea that battery-powered freight trucks could replace diesel vehicles has often been dismissed as unrealistic, largely because of the belief that the trucks would lack the needed range, and that the batteries would be too costly.

New SEI research suggests that this view is out of date – and is soon to be upended by technological progress.

The study shows that the availability of fast, high-capacity charging is a key for progress. Having such fast and powerful charging options available means that the batteries on the trucks can be kept relatively small and light. This solves a basic conceptual problem – the idea that the batteries would be so bulky and heavy that they would limit the amount of goods that the trucks could carry. This breakthrough significantly reduces costs.

Related: Climate change: Electric trucks ‘can compete with diesel ones’