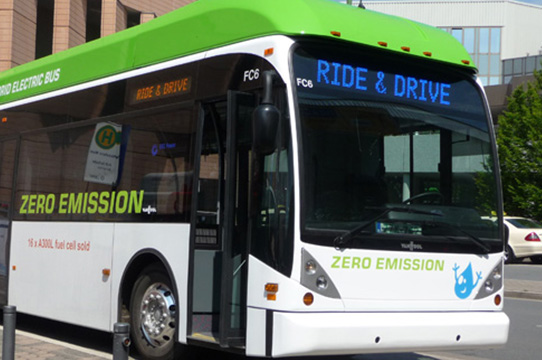 With all eyes on Glasgow for COP26, and hydrogen power high on the political agenda as one of the nation’s greatest assets in the race to Net Zero, a Nottingham-based manufacturer is celebrating its expertise being embedded into world-firsts project that are set to steal the show.

Luxfer Gas Cylinders has over two decades of legacy in designing industry-leading alternative fuel systems, which harness hydrogen for transport. The firm has been commissioned by major players in the field, to provide bespoke and innovative solutions across rail, road, river and more.

This includes the HydroFLEX – a former Thameslink electric train retrofitted to run using a hydrogen fuel system, designed by Luxfer. It will take its very first passenger journey at the Climate Change Summit, with special guests using the ‘on-board boardroom’.

The world-first double-decker hydrogen buses, launched in Aberdeen earlier this year are destined for the streets of Glasgow during COP26, powered by Luxfer-designed systems. Dubbed ‘one of the greenest cars on the planet’, the Rasa hydrogen-powered two-seater – fitted with a gas storage system from Luxfer engineers – plans to be in Glasgow too.

As will Arcola Energy-led hydrogen train project, which is a converted ScotRail electric train benefitting from Luxfer’s know-how.

Ahead of the biggest environmental event in recent history Mark Lawday, Global Sales Director at Luxfer, can provide expert commentary on hydrogen as a crucial fuel to enable the UK to reach zero emissions targets. No stranger to innovation, Luxfer is internationally renowned as a partner in zero-emission hydrogen powered vehicles and began life over 125 years ago, producing high-pressure gas cylinders since the 1930s, and pioneering the hydrogen tank and valve technology from the late 1990s.

Issued on behalf of Luxfer Cylinders by The Tonic Communications. For more information contact luxfer@thetoniccomms.co.uk