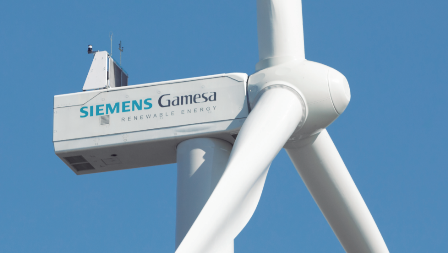 Siemens Gamesa and Repsol have signed their first contract together that will see the installation of 24 SG 5.0-145 wind turbines across four wind farms in Spain, with a total installed capacity of 120 MW. This is the first contract between the pair as the Spanish multi-energy giant rolls out its ambitious growth plans in renewable energy.

The agreement includes the supply to Repsol of 20 turbines for two wind farms in the province of Zaragoza, in the North-East of Spain (part of Delta II project), for 100 MW, and the installation of four wind turbines in two other wind farms in the province of Valladolid to the North-West of the country (part of the PI project), with a capacity of 20 MW.

Repsol’s Delta II project consists of 26 wind farms located in the provinces of Huesca, Zaragoza and Teruel. It will have a capacity of 860 MW, and will be developed between now and 2023. When operational it will supply electricity to 1.8 million people, over the entire population of the region of Aragon. In addition, it will prevent the emission of more than 2.6 million tons of CO2 per year. The wind farms in Valladolid correspond to the PI project, which will have a total installed capacity of 175 MW.

The SG 5.0-145 is one of the most powerful onshore turbines in Spain, with just one supplying sufficient green energy to around 4,000 households. The wind farms are scheduled to be commissioned between the end of 2021 and the beginning of 2022. The agreement includes the maintenance of the turbines for a period of five years.

“It is a great satisfaction to have reached this first agreement with Repsol, which I am sure will be the first of many. We are also proud to contribute to the ambitious renewable growth plans of one of Spain’s largest and most international energy companies. Together we will collaborate to help meet the country’s decarbonization targets,” said Enrique Pedrosa, Siemens Gamesa Managing director for Spain.

Siemens Gamesa also supplies the wind turbines for the Cabo Leones III project, which Repsol is developing in Chile in its joint venture with Ibereólica Renovables.