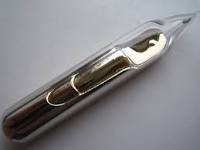 The 5G revolution, American military defense, and even time itself are dependent on this one critical metal that China monopolizes and that the U.S. is desperate to get more of.

The metal is Cesium, and it’s quite possible you’ve never even heard of it–yet, global dominance, which depends on technological superiority, can’t happen without it.

In May 2018 Cesium was added to the list of critical minerals by the United States Department of the Interior.

In fact, there are 16 metals in total that are absolutely critical to high-tech industries, military applications and telecommunications–and China controls the supply of every single one because it controls 96% of production.

That includes cesium, for which China has a monopoly on stockpiles, mines aren’t really producing anymore, and the United States has none, leaving North America’s only hope in Canada.

Time Is Running Out for This Most Strategic of Metals

Cesium is so secretive and obscure that it’s nearly impossible to track its real market price.

It’s strategic in and of itself, but its rarity makes it even more critical.

The supreme technological war of global dominance can’t be won without these metals, so whoever controls them has the upper hand.

Cesium is described by the German Institute for Strategic Metals (ISE) as “the most electropositive of all stable elements in the periodic table”, and the heaviest of the stable metals. Cesium is “extremely pyrophoric, ignites spontaneously when in contact with air, and explodes violently in water or ice at any temperature above -116 C”.

The strategic metal’s applications in the healthcare industry are expected to soar as laboratories already use cesium compounds in medical imaging, cancer therapy, positron emission tomography (PET) and others.

The latest market analysis by Technavio predicts the cesium market will grow by 1.66 thousand MT between 2020 and 2014, driven by everything from catalyst promoters, glass amplifiers, photoelectric cell components, crystals in scintillation counters, and getters in vacuum tubes.

Much cesium demand also comes from the oil and gas industry, which uses cesium formate brines in drilling fluids to prevent blow-outs in high-temperature, over-pressurized wells.

In terms of world dominance, the “cesium standard” is the key. This is the standard by which the accurate commercially available atomic clocks measure time, and it’s vital for the data transmission infrastructure of mobile networks, GPS and the internet.

That means it has serious defense applications as well, including in infrared detectors, optics, night vision goggles and much, much more. A cesium laser has even been invested for use in missile defense and other technological applications.

So, imagine China being able to starve manufacturers of something like cesium, which would seriously disrupt U.S. industry and hinder the development of critical military equipment.

That’s why, finally, in December 2019, the United States and Canada agreed on a strategy to reduce the need for rare-earth metals mined or controlled by China.

The only company in the cesium supply chain right now is Chinese, and one of the only companies on the radar for potential commercial cesium supplies in North America is Canadian junior Power Metals, which is hoping to prove that it’s sitting on the world’s fourth deposit of the critical metal.

The company discovered the pegmatites at West Joe Dyke in August 2018, intersecting high-grade cesium mineralization in six drill holes when it was targeting lithium instead.

So, the focus now is not on what has been lost to China, but the promise of new North American critical cesium.

But Dr. Julie Selway, a key geologist for the Ontario Geological Survey during the tantalum boom of the early 2000s, and now VP of exploration for Power Metals, says the three properties the company is drilling are likely to have similar finds as the strategically important Sinclair mine in Australia.

“They are shipping their resource, which they say is higher than 10% cesium-oxide, and ours have some that are between 12% and 14% of cesium-oxide,” Selway–one of the world’s most renowned experts on pegmatites–told Oilprice.com.

On February 20th, Power Metals announced its exploration plans, and will begin stripping and channel sampling on West Joe Dyke in the Q2 of this year already. That’s when they’ll expose, sample and assay the cesium mineralization on surface outcrops to find more cesium-bearing pegmatite dykes nearby.

This is one big chance to one-up Beijing, which, according to the Wall Street Journal, has tried to manipulate the market so critical metals such as Cesium are cheaper in China than outside the country. What this did was prompt some major manufacturers and tech industries to set up shop in China, where they could get supplies at a lower cost.

You might not have heard of cesium before, but you will hear about it soon because North America needs its own supply if it’s going to win the war for global technological dominance–and the front line of defense could end up being West Joe Dyke, and a junior explorer that not only thinks strategically, but may be sitting on one of the only deposits that China doesn’t control.

Caesium is a chemical element with the symbol Cs and atomic number 55. It is a soft, silvery-golden alkali metal with a melting point of 28.5 °C, which makes it one of only five elemental metals that are liquid at or near room temperature. Wikipedia