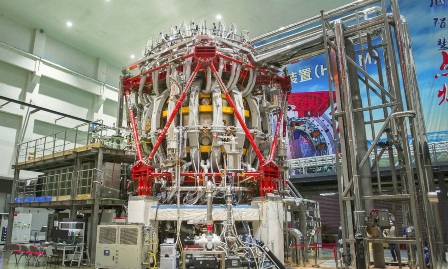 China’s Experimental Advanced Superconducting Tokamak (EAST) has set a new record in the latest experiment, where it achieved a plasma temperature of 216 million Fahrenheit (120 million C) for 101 seconds. Not just that, the scientists working on the “artificial sun”, also achieved 288 million Fahrenheit (160 million C) for 20 seconds, according to state media reports.

Situated at the Institute of Plasma Physics of the Chinese Academy of Sciences (ASIPP) in Hefei, the Tokamak device has been designed to reproduce the nuclear fusion process, something natural to the Sun and stars. The experiment is being carried out to provide infinite clean energy through controlled nuclear fusion. The previous record maintained a plasma temperature of 180 million F (100 million C) for 100 seconds, which has now been broken, a big step towards getting nuclear fusion to work.

The ‘artificial sun’ is part of an international energy project