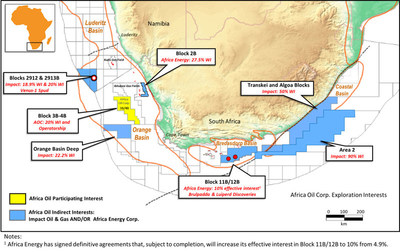 Africa Oil President and CEO Keith Hill commented: “I am pleased to report another strong quarter of operating and financial results. We received our largest dividend payment from Prime to date for $100 million. This takes our total dividend receipts to $500 million since our acquisition of a 50% interest in Prime in January 2020 for $520 million. Also, our share of Prime’s cash at end of first quarter 2022 of approximately $266 million, compares to about $70 million at the time of the acquisition. Prime’s performance, that includes achieving positive reserves replacement ratios for the last two years, has exceeded all our expectations. However, I view the news of the Venus light oil discovery as the most important and exciting update in the first quarter of this year. Most immediately, we can look forward to the high-impact Venus appraisal drilling program and the Gazania exploration well, both of which are expected to commence later this year. We also have further prospectivity on Block 3B/4B, which we operate with a 20% interest and on Impact’s Orange Basin Deep Block, both are in Orange Basin and on trend with the Venus discovery.”