Collaboration to introduce hydrogen-powered fuel-cell trucks in the UK 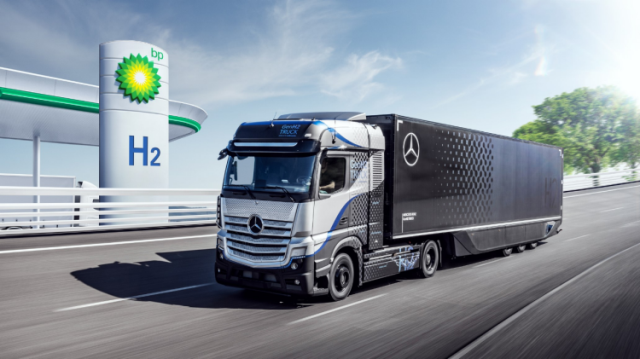 Collaboration to introduce hydrogen-powered fuel-cell trucks in the UK

bp and Daimler Truck AG today announced plans to work together to help accelerate the introduction of a hydrogen network, supporting the roll-out of a key technology for the decarbonization of UK freight transport. They intend to pilot both the development of hydrogen infrastructure and the introduction of hydrogen-powered fuel-cell trucks in the UK.

Under their memorandum of understanding (MoU), bp will assess the feasibility of designing, constructing, operating and supplying a network of up to 25 hydrogen refuelling stations across the UK by 2030. These stations would be supplied by bp with ‘green’ hydrogen – generated from water using renewable power. Complementing this, Daimler Truck expects to deliver hydrogen-powered fuel-cell trucks to its UK customers from 2025.

Daimler Truck has the ambition to offer only new vehicles that are CO2-neutral in driving operation (“from tank to wheel”) in Europe, North America and Japan by 2039. The company is focussed on both CO2-neutral technologies, battery power and hydrogen-based fuel-cells. Currently, the truck manufacturer is testing a new enhanced prototype of its Mercedes-Benz GenH2 Truck on public roads in Germany. The first series-produced GenH2 Truck are expected to be handed over to customers starting in 2027.

Daimler Truck has a clear preference for liquid hydrogen.