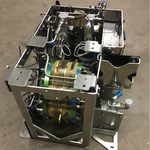 The AMPES system is a scalable modular system that employs Infinity’s patented non-flow through, air-independent fuel cell technology. The technology could be used to power landers, rovers, surface equipment and habitats on the moon or Mars.

Infinity founder and CEO, William F. Smith remarked, “Despite the anomaly, we are pleased with the initial data and look forward to further analysis.”

This was the first launch of a fully integrated H2-O2 fuel cell power system aboard a space-capable vehicle since the retirement of the Space Shuttle and the first-ever aboard a commercial space launch vehicle. The results mark an important test and milestone in the development of Infinity’s technology.

About Infinity: Founded in 2002, Infinity Fuel Cell and Hydrogen, Inc. is a market leader in the design and manufacture of air-independent, zero-gravity electrochemical systems including fuel cell systems for space and underwater applications. Infinity is also developing electrolysis technologies that can generate hydrogen and oxygen directly at 2000 psi and above.