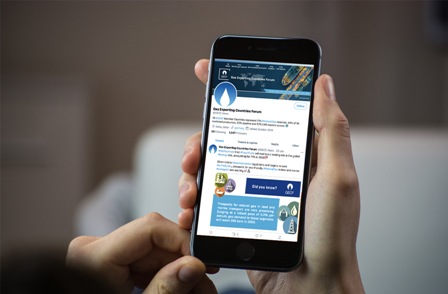 The Gas Exporting Countries Forum (GECF), the global platform of the leading gas producing nations, has activated a new communication campaign on its social media channels that raises awareness about the benefits of natural gas as well as simplifies the facts of an industry often perceived as data heavy.

Being run on GECF’s Twitter and LinkedIn channels, the ‘Did You Know…?’ series of posts provide easy-to-understand facts, figures, and data on an energy source that likely powers the batteries of the phones users will read the information on. It also calls to attention any misconception around this important source of energy found in abundance in pockets around the world.

“In the midst of an “infodemic” it is increasingly hard to differentiate facts from the noise. Further, due to the complexity of energy systems, end-users rarely get to glimpse at the processes that eventually power most aspects of their daily lives, such as electricity at home, prospects for frontrunning technologies, fuelling of vehicles and so on,” said GECF Secretary General Yury Sentyurin.

Scientifically-grounded data and insights are championed at the GECF, which was established to bring a better understanding about technology that underpins the full spectrum of energy areas, to promote natural gas as the fuel of choice, as well as to promote cooperation at all levels of global energy system. The Forum recently entered a landmark MoU with UNESCO to further enhance its role in environmental protection and to cultivate a “culture of energy responsible behaviour”.

“Our campaign’s goal is to de-mystify the world of energy and, really, democratise it for every one’s understanding. Today, as we live in times of rising appetite for energy, ever-increasing struggle for climate protection and better future for all, social media has become a tool in global geopolitics. The GECF social media campaign ‘Did You Know…?’ aims to empower the community around the world with a new appreciation and understanding about an element that holds such a powerful impact on people’s quality of life,” the Forum’s representative noted.

According to the latest available projections, quantified through the use of unique and highly granular GECF Global Gas Model, fossil fuels will maintain a leading role in the global energy mix, accounting for at least 71% in 2050 (against 81% in 2019) of the world’s energy need. Meanwhile, natural gas will be the only hydrocarbon resource to increase its share from 23% today to 28% in 2050.

“Natural gas is often lumped together with other traditional fuels due to its origins as a hydrocarbon fuel without recognising the attributes that distinguish it for its low-emissions and dynamic flexibility. As a platform dedicated to promoting the use of this cleanest of the fossil fuels, we felt it is important to broaden people’s understanding of its economic and environmental advantages,”. HE Yury Sentryurin emphasised.