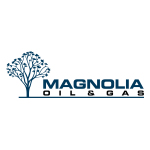 “First and foremost, we would like to extend our deep support to Steve’s family,” said Dan Smith, who previously served as Magnolia’s Lead Independent Director and has been named as Chairman of the Board. “Steve is an exceptionally talented and revered leader, who will leave an extraordinary legacy on our industry. Not only has Steve led an evolution of Magnolia, but his influence has also shaped the oil & gas landscape and the greater business and Houston communities. He cares deeply about Magnolia and our employees and created opportunities for many throughout his career. We share a commitment to carrying out the initiatives Steve developed, both inside Magnolia and in our local communities.”

Mr. Smith continued, “Steve has always expressed his utmost confidence in Chris, and the Board believes Chris is uniquely qualified and the right person to lead Magnolia. Our Board has engaged in thoughtful long-term succession planning, and today’s announcement demonstrates the strength of that process as well as our depth of talent to drive the Company’s business plan and continued success.”

Mr. Stavros said, “I have had the honor for almost two decades to call Steve not only a mentor and colleague, but also a dear friend. Steve is a charismatic and transformational leader with a passion for our business. We are all privileged to have worked with Steve and are grateful for the impact he has had on us. I step into this role confident that Magnolia is well positioned to successfully execute our strategic plan.”

Mr. Stavros will continue to serve as the Company’s Chief Financial Officer until a permanent successor is appointed.