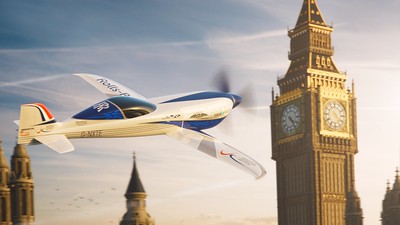 Rolls-Royce announced the completion of the first flight of our all-electric ‘Spirit of Innovation’ aircraft. At 14:56 (BST) the plane took to the skies propelled by its powerful 400kW (500+hp) electric powertrain with the most power-dense battery pack ever assembled for an aircraft. This is another step towards the plane’s world-record attempt and another milestone on the aviation industry’s journey towards decarbonisation.

The aircraft took off from the UK Ministry of Defence’s Boscombe Down site, which is managed by QinetiQ and flew for approximately 15 minutes. The site has a long heritage of experimental flights and the first flight marks the beginning of an intense flight-testing phase in which we will be collecting valuable performance data on the aircraft’s electrical power and propulsion system.

The ACCEL programme, short for ‘Accelerating the Electrification of Flight’ includes key partners YASA, the electric motor and controller manufacturer, and aviation start-up Electroflight. The ACCEL team have continued to innovate while adhering to the UK Government’s social distancing and other health guidelines.