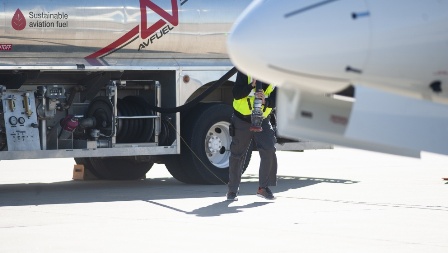 Sustainable aviation fuel (SAF) has been safely delivered to New York’s LaGuardia Airport through the Colonial and Buckeye pipeline systems – two essential pieces of American energy infrastructure. The low-emission jet fuel will power a Delta Air Lines flight, marking a seminal moment in the ongoing development and distribution of SAF in the U.S.

“SAF is the most effective tool we have to decarbonize our industry,” said Pamela Fletcher, Delta’s Chief Sustainability Officer. “These efforts show how existing infrastructure can be used to transport SAF to East Coast airports and drive down emissions – a critical step as we move toward a more sustainable future for air travel.”

This partnership between Delta, Neste, Colonial Pipeline and Buckeye Partners demonstrates the long-term viability of SAF and the airline industry’s journey towards net zero. Importantly, it shows that SAF can go anywhere there is an existing pipeline currently carrying fossil jet fuel.

The milestone delivery and flight is supported by the Port Authority of New York and New Jersey, the first U.S. transportation agency to embrace the Paris Climate Agreement and a champion for accelerating the use of sustainable fuels.

“Increasing and accelerating the use of sustainable aviation fuel is a key strategic element if we are to decarbonize air travel, and the Port Authority is committed to supporting our airline partners in this transition,” said Port Authority Executive Director Rick Cotton. “If we are to achieve a net-zero future, it is imperative that we collectively take action to enable a transition to sustainable aviation fuel.”

Neste completed the final processing steps of its Neste MY Sustainable Aviation Fuel™ at a Texas refinery that previously produced chemicals. The fuel was loaded into Colonial Pipeline and transported nearly 1,500 miles across 11 states to New Jersey before entering the Buckeye Pipeline and sent on to LaGuardia.

“The U.S. East Coast is home to some of the USA’s busiest airports, and the vast majority of them get their fuel from the Colonial Pipeline system and, in New York, the Buckeye Pipeline system,” said Chris Cooper, Neste’s Vice President of Renewable Aviation in Americas. “What we’re doing here is showing that just around the corner is a future where passengers at Atlanta’s Hartsfield-Jackson up to LaGuardia, JFK and EWR can board a plane flying on SAF.”

SAF is a direct replacement for conventional jet fuel, subject to current blending limitations and is made from renewable waste and residues and other biomass. When used in neat form, SAF reduces greenhouse gas emissions by up to 80 percent* over its life cycle when compared with conventional jet fuel. Once blended, SAF is chemically identical to fossil jet fuel, and works seamlessly with existing fueling infrastructure and aircraft engines.

“Colonial Pipeline is excited to not only meet our customers’ evolving needs for the transport of renewable fuels but to be one of the first to accept it onto a traditional pipeline network,” said Dan Gordon, SVP and Chief Commercial Officer. “Our pipeline is ideally situated to safely and efficiently deliver jet fuel from producers in the U.S. Gulf Coast directly to seven East Coast international airports, along with other large and mid-market airports. We see the transport of SAF and other renewable fuels as an opportunity to further diversify our offerings.”

“Leveraging Buckeye’s existing infrastructure and capabilities to increase the accessibility of SAF available to our customers and end users, stems from our commitment to supporting partners, like Neste and Delta Air Lines, who are at the forefront of the energy industry’s evolution,” said Todd Russo, Buckeye’s CEO. “The impact of our collaborative efforts will ultimately play a key role in decarbonizing and improving the sustainability of the aviation industry.”