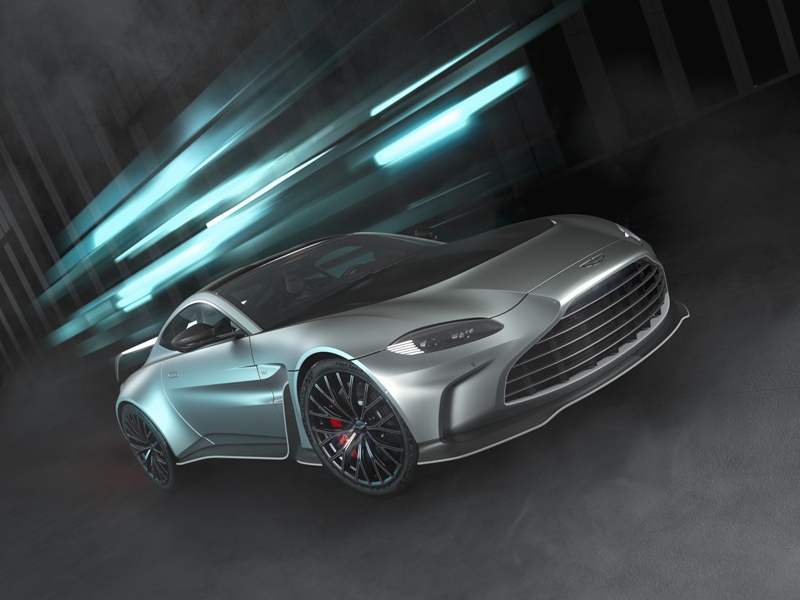 For fifteen years the V12 Vantage has boldly represented Aston Martin’s passion for performance. Fast and fierce in equal measure, successive iterations of these great cars have formed an iconic bloodline. One built around the premise of fitting the most compact and driver-focussed model with the largest and most potent series production engine. With this unique lineage nearing its end, Aston Martin is proud to introduce the fastest, fiercest and most dynamically accomplished of them all; the new V12 Vantage.

With production of the V12 Vantage strictly limited to 333 examples globally, this final edition celebrates the end of an epic era in fitting style. The ultimate expression of extreme performance and driver-focussed thrills, this remarkable machine mixes blistering straight-line speed and scintillating handling with spectacular looks and enviable exclusivity: An extremely enticing proposition.

So enticing, that since V12 Vantage was confirmed in December last year, Aston Martin have seen unprecedented demand for this future icon with all examples sold ahead of release and an oversubscribed register of interest eagerly waiting in the wings.

Aston Martin Chief Executive Officer, Tobias Moers, said of the V12 Vantage: “Every great sportscar brand has a hero car. For Aston Martin in more recent years that car has been the V12 Vantage. Right from the moment the first V12 Vantage RS Concept was shown back in 2007 our customers and fans around the world fell in love with the idea of fitting our biggest engine into our smallest and most sporting model. The recipe has been refined over the years with great success, but the essence has remained the same. Now it is time to bring this bloodline to a close, fittingly with the most spectacular example yet – the fastest, most powerful and most dynamically capable V12 Vantage ever. A celebration of its forebears and an embodiment of Aston Martin’s intensifying focus on driving dynamics, it ensures the V12 Vantage goes out on the highest of highs”.

The engine is the heart of every Aston Martin, but never more so than in this, the fastest and most powerful Vantage ever built. Developing 700PS at 6500 rpm and 753Nm of torque from just 1800rpm to 6000rpm, the quad-cam 60-deg 5.2-litre V12 offers an intoxicating combination of magnificent low and mid-range muscularity with searing top-end power. With a top speed of 200mph, V12 Vantage reaches to 0-60 in just 3.4 seconds. Thanks to the propulsive efforts of this magnificent powerplant – and extensive use of weight-saving materials throughout the car – the V12 Vantage has a power-to-weight ratio of 390PS-per-ton; an increase of more than 20% compared to the V8 powered Vantage.

These weight saving measures include carbon fibre front bumper, clamshell bonnet, front fenders and side sills, composite rear bumper and deck lid, lightweight battery and a special centre-mounted twin-exit exhaust system. Tuned to ensure the V12 Vantage has a voice to match its looks and performance, this new exhaust system is made from lightweight 1mm stainless-steel, saving some 7.2kg compared with the system fitted to the Vantage.

The power is fed through a ZF 8-speed automatic transmission and mechanical Limited-Slip Differential (LSD) mounted at the rear of the car. The V12 Vantage receives a unique transmission calibration to enhance shift speeds and driver interaction, with learnings taken from the V12 Speedster and Vantage F1® Edition models. This specially calibrated software delivers a level of shift refinement and usability which is beyond that seen on dual clutch gearboxes. The transmission’s adaptive software is designed to gauge the conditions the car is operating in, along with the demands the driver is making, to ensure the car is in exactly the right gear at the right time providing a truly connected driving experience.

Like its celebrated forebears the new V12 Vantage is focused on delivering a dynamic driving experience that compliments its unmistakable engine performance and character, while ensuring the driver truly remains at the centre of the driving experience. To achieve this, the car is equipped with a new adaptive damping suspension system including new anti-roll bars, bushes, and spring and damper assemblies.

Suspension spring rates have been increased by 50% at the front and 40% at the rear, combined with top mount stiffness increasing by 13% and new anti-roll bars are 5% stiffer at the front and 41% softer at the rear. To maintain comfort for the driver, a secondary tender spring has been introduced to the rear. The tender spring provides a lower spring rate than the main spring providing enhanced ride comfort without affecting dynamic performance.

These changes are also supported by a new steering calibration, improving steering feel and delivering a sharper response – and in turn, an enhanced driver experience.

TotalEnergies to Assess the Humanitarian Situation in Cabo Delgado Province