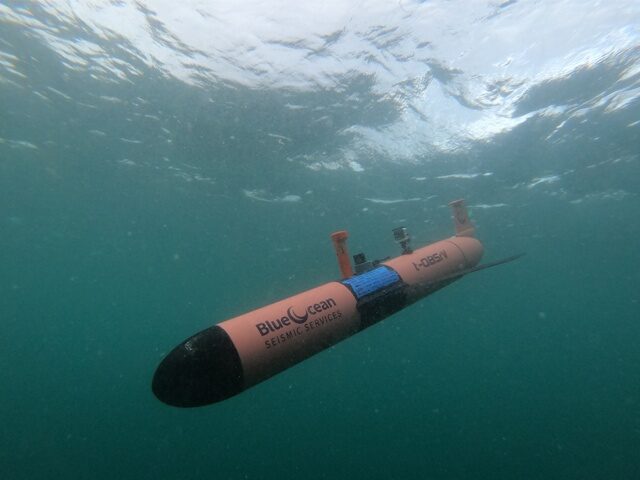 Blue Ocean Seismic Services, the marine seismic survey disruptor, announced that it has completed a series of passive and active sea trials in the North Sea using a DP2 class Multi Role Vessel. When tested at various weights, the Company’s underwater autonomous vehicle successfully and consistently coupled to the seabed and acquired high-quality ocean bottom seismic (OBS) data for offshore exploration and other applications such as Carbon Capture and offshore wind farm development. The data collected was comparable to existing Ocean Bottom Node technology.

The success of these trials marks a significant milestone towards validating the efficacy of Blue Ocean Seismic Services’ revolutionary technology for identifying and optimising offshore renewable, carbon capture storage and oil and gas sites located under the seabed. Following further design optimisations the Company will now advance to additional seismic trials in multiple locations, followed by pre-commercial sea trials alongside its investment partners commencing in H1 2022 and continuing throughout the year.

Currently, marine seismic data acquisition remains heavily dependent on technology developed over half a century ago. Streamer cables are laid from the aft of a diesel-powered vessel and towed on a previously designated track line traveling at 2 to 5 knots. This is not suitable for many locations and environments.  The main alternative is ROV positioned Ocean Bottom Nodes which is very costly and both solutions are carbon intensive.  In contrast, Blue Ocean Seismic Services’ long endurance, self-repositioning underwater nodes are designed to explore the subsurface of the ocean using world-class autonomous technology to enable reduced carbon, lower-cost ocean bottom seismic acquisition. The Company’s ground-breaking technology is expected to reduce seismic survey costs by more than 50 per cent and remove the need for energy-intensive exploration vessels.

“Completing these successful sea trials is a crucial milestone for the Blue Ocean Seismic Services team and our revolutionary underwater vehicles. We know now that our autonomous vehicles can withstand extremely challenging environments and continue to gather high quality data from below the seabed which can identify carbon capture storage, renewable, and oil and gas sites. We continue to have a strong, broad industry interest in our technology and these results unlock the next phase of our development allowing us to advance to pre-commercial sea trials next year in preparation for commercial operations. We look forward to providing updates as we scale our company in the coming months.”