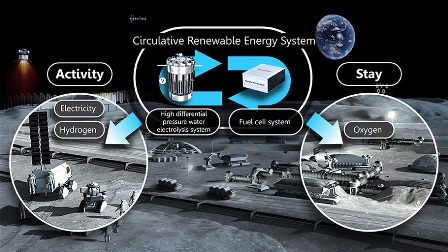 The Japan Aerospace Exploration Agency (JAXA) and Honda R&D Co., Ltd. (Honda) today announced the plan to begin a joint feasibility study on a “circulative renewable energy system” in space, which is designed to supply oxygen, hydrogen, and electricity for human outposts and rovers. JAXA and Honda have been conducting a joint research on this system to create an environment in space where people can stay and conduct activities over an extended period of time.

In addition to water and food, people need oxygen, as well as hydrogen for fuel and electricity for various activities for life in space. One of the solutions to obtain them in space without resupply from Earth is creating a circulative renewable energy system, which combines a high differential pressure water electrolysis system that produces oxygen and hydrogen using solar energy to electrolyze water and a fuel cell system that generates electricity and water from oxygen and hydrogen.

Based on this concept, in November 2020, JAXA and Honda signed a three-fiscal year joint research agreement (through JFY 2022) to pursue research on the circulative renewable energy system for use on Lunar Orbital Platform-Gateway (Gateway) and on the surface of the Moon, utilizing Honda’s high differential pressure water electrolysis and fuel cell technologies.

In this joint research, while JAXA has been developing the study conditions according to the scenarios and requirements for missions related to the production of oxygen on the Gateway and the supply of electricity to rovers on the lunar surface based on the past investigations, Honda has been conducting technological studies to realize the missions and scenarios set by JAXA.