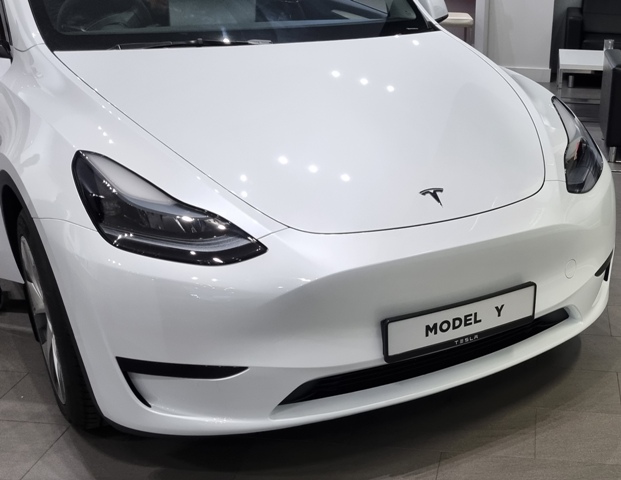 Banks in the GCC region need to demonstrate they are serious about supporting the energy transition market to help mitigate climate change, a top HSBC Bank official said at the Abu Dhabi Sustainable Finance Forum (ADSFF). They need to think about having the right assessments of climate risk and understand what clients are telling them about their energy transition needs. Banks must also share what they have learned with those in other regions to have a chance of success in financing energy transition, said Zoe Knight Group Head, HSBC Centre for Sustainable Finance, and Climate Change, MENAT, HSBC. Read More

Candela powered by Polestar: an electric future at sea
The electric revolution is creating a tidal wave of change. Together with our new partner Candela, we are riding this wave on our voyage toward a sustainable future, both on land and at sea. latest partner is Candela, the Swedish premium electric boat manufacturer. Together, we’re charting a course towards an electric future at sea. The new model is “pushing the boundaries of what electric boats and ships can do”. And better still, now it will be powered by Polestar.

Announced in August 2022, the partnership marks Polestar’s first time supplying charging componentry to a third party. The Candela C-8 will use the same battery pack and charging technology as the Polestar 2 Standard range Single motor, providing a range of up to 57 nautical miles on one charge. As a result, Candela C-8 will have a range two to three times longer than conventional electric speed boats.

In the words of Candela CEO Gustav Hasselskog: “The Candela C-8 is the first electric vessel that can travel to destinations that were previously only reachable by combustion engine boats”.    Read More

Norway will offer up to 92 new blocks to explore for oil and gas in the Norwegian Sea and the Arctic Barents Sea as part of its new mature areas licensing round, the country’s energy ministry said on Tuesday.The deadline for applications is set to the third quarter of 2023, while the awards will be announced in January of next year, he said.(Reuters) Read More

Tesla is preparing to announce a new $3.5 billion advanced manufacturing facility in Nevada where the company will build its Semi truck. The new factory will be announced alongside state officials, including Governor Joe Lombardo during an event at Giga Nevada on Tuesday. Read More

Aptera makes DC fast charging standard on all solar EVs
ALL Aptera vehicles will come with DC fast charging, including the first Launch Edition vehicles that roll off the assembly line. We will be able to offer between 40 and 60kW of DC Fast Charging with our Launch Edition vehicles. Once testing is complete, we will provide an update on our max charge rates. We will also be working on a 100kW version for release down the road. Our DC Fast Charging system is designed to work with the Super Charger Network, so if Tesla agrees to open their network up to Aptera owners, your Launch Edition vehicle will be ready to go. Tesla’s Supercharging network has 60% more North American Charging Standard posts than all of the CCS-equipped networks combined, so it could be a huge selling point for future Aptera owners. Read More

A new scorecard by Friends of the Earth, Avaaz, and Greenpeace USA shows that social media companies are largely leaving the public in the dark about their efforts to combat the problem. There is a gross lack of transparency, as these companies conceal much of the data about the prevalence of digital climate dis/misinformation and any internal measures taken to address
its spread. Pinterest and YouTube have taken notable steps to address climate dis/misinformation, while Facebook, TikTok,and Twitter trail behind in their efforts.Despite half of US and UK adults getting their news from social media, social media companies have not taken the steps necessary
to fight industry-backed deception – in fact, they continue to allow these climate lies to pollute users’ feeds. Read More

Shell on January 23 said its QGC business in Queensland is offering an expression of interest (EOI) for 8 petajoules (PJ) of gas for delivery in 2023. Shell had last month suspended talks with Australian customers for new supply contracts after the federal government announced its decision to cap prices at A$12/GJ.

The volume offered by Shell is in addition to the 20PJ of gas offered domestically since December 2022, at or below $12/GJ, of which over 13PJ has been contracted, the company said. “The volumes have been offered either through hubs, bilaterally or via swaps that facilitate additional supply into the peak winter periods,” Shell said. Read More

The Colombian government has decided it will not issue new oil and gas exploration contracts and instead will direct investments to tourism and renewable-energy sources.

EDF Colombia and Refocosta partnered to build the largest biomass power generation plant from the eucalyptus crop in the country. The plant will be located in the municipality of Villanueva (Casanare) and will have a total installed capacity of 25 MW Net. The energy will be supplied entirely to the Ecopetrol Group, through an agreement with Gecelca SA In total, more than 200 GWh per year of green and firm energy will be generated, which will mean a reduction in CO2 emissions of more than 70,000 tons per year1 in the country’s energy matrix.

One of the most important aspects of this project to highlight consists of the positive impact that it will generate for the regional and local economy, since this technology covers an extensive value chain that goes from work in the nursery, through the preparation of the land and crop management to energy production. Read More

Ecopetrol and Total Eren announced that they have signed an agreement to start up the Rubiales photovoltaic (PV) solar park.

This photovoltaic solar park will be built in the Rubiales field, owned by Ecopetrol and one of the most important in the Colombian hydrocarbons industry, located in the municipality of Puerto Gaitán, Meta.

Ecopetrol selected Total Eren to develop, finance, build and operate this approximately 100 megawatt peak solar park through a bidding process. Total Eren will have a 51% stake in the project and Ecopetrol the remaining 49%. Construction works are expected to begin in the first quarter of 2023 and the park is expected to come into operation in the first quarter of 2024. This initiative is part of the decarbonization strategy of the Ecopetrol Group and its commitment to accelerate the energy transition in Colombia, contributing to the sustainable growth of the region thanks to the reduction of more than 24,000 tons of CO₂ emissions per year. Read More

Early December 2022, officials in Region Västra Götaland, Sweden, decided to extend the Everdrone First on Scene Solutions™ project of drones as first responders throughout 2023. An important step towards a permanent establishment of the drone-delivered AED units to the entire region, but also an opportunity to keep gathering insights in collaboration with the largest regional healthcare provider in Sweden. Since the start of the collaboration between Region Västra Götaland and Everdrone in June 2020, the project has been conducting live operations which have delivered valuable results and made a positive impact on the Region’s emergency response efforts. The use of drones to promptly deliver defibrillators has proven to be significantly faster than traditional ambulance first responder assistance. The successful outcome of the ongoing project has prompted Region Västra Götaland to extend the collaboration for the entirety of 2023. The decision to extend is the next substantial step towards integrating drone deliveries of AED (automated external defibrillators) into the Region’s life-saving chain on a permanent basis, something that has been the overall ambition for both Region Västra Götaland and Everdrone. “This is extremely positive news for everyone involved in the project”, says Magnus Kristiansson, Innovation Platform Manager within Region Västra Götaland. “This gives us valuable time to keep adding to our growing knowledge database, to get more insights and keep on learning more on how we can use the technology and the whole system for the benefit of the Region’s inhabitants.” Read More

Microsoft announced Monday that it is making a ‘multiyear, multibillion-dollar investment’ in the startup OpenAI, the maker of ChatGPT, to compete with Google in commercializing new AI breakthroughs. A Microsoft spokesperson declined to comment on the terms of the latest investment, which some media outlets reported would be $10 billion. The partnership will help further the chatbot by providing OpenAI with the necessary resources. OpenAI’s free writing tool ChatGPT launched on November 30 and has brought public attention to the possibilities of new advances in AI. Read More

The International Monetary Fund will release its World Economic Outlook Update in Singapore on January 31, 2023, at 9:30 am (January 30, 2023, at 8:30 pm in Washington DC). The WEO Update provides an overall assessment of the macroeconomic outlook and challenges for the global economy. A hybrid press conference will follow. When: 09:30 am to 10:30 am Singapore time, Tuesday, January 31, 2023 Where: 79 Robinson Road, CapitaSky, Bridge +, Level 2 (Metro 2), Singapore 068897 Read More

Honda Motor Co., Ltd. announced that its Nominating Committee today made an internal decision on the following personnel changes in its Directors to become effective as of the date of the Ordinary General Meeting of Shareholders of the Company scheduled to be held in June 2023, and that its Board of Directors today decided on personnel changes in its Representative Executive Officers, Executive Officers and Operating Officers to become effective as of April 1, 2023.

The personnel changes in Directors to become effective as of the date of the Ordinary General Meeting of Shareholders scheduled to be held in June 2023 shall be formally determined at that Ordinary General Meeting of Shareholders, and the personnel changes in Executive Officers to become effective as of such date shall be formally determined at a meeting of the Board of Directors scheduled to be held on that same day. Read More

Honda announced that it has signed a research and development contract with the Japan Aerospace Exploration Agency (JAXA) regarding the “circulative renewable energy system” that is designed to supply electricity to maintain the functionality of the living space and various systems of lunar rovers. Based on this contract, Honda will be commissioned by JAXA to first conduct concept studies, then to develop a “breadboard model*2,” the early-stage prototype, by the end of the Japanese 2023 fiscal year (March 31, 2024). The circulative renewable energy system combines Honda’s original high differential pressure water electrolysis system and a fuel cell system, and is designed for continuous production of oxygen, hydrogen and electricity from solar energy and water. After signing a joint research agreement with JAXA in November 2020,

Honda pursued research on the circulative renewable energy system for use on the surface of the Moon. The signing of this new R&D contract represents another step forward for Honda. Read More